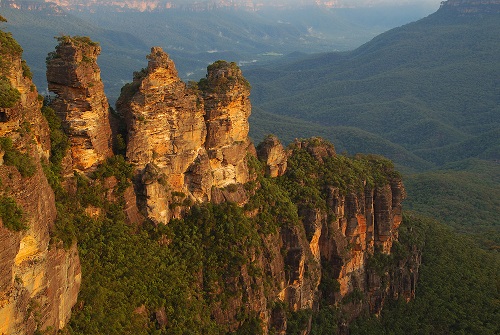 What are the most famous landmarks in the Blue Mountains?

The Three Sisters natural landmark is one of the most famous and recognisable places to see while holidaying on Blue Mountains packages. It’s a uniquely shaped rock formation made up of three tall pillars. Aboriginal Dreamtime legend says the pillars are sisters from the Katoomba tribe who were turned to stone by a witchdoctor. Head to Echo Point while visiting the area on Blue Mountains holiday packages to view the Three Sisters. It’s always beautiful, but particularly at sunset when they glow golden. Visitors can also descend a staircase to the first of the Three Sisters to see it up close.

Head to the western edge of the national park while holidaying on Blue Mountains packages to visit the Jenolan Caves. The dramatic cave system consists of 300 unique caverns, and nine are open to visitors. Highlights of the Jenolan Caves include Lucas Cave, Temple of Baal Cave, and the River Cave. Visitors holidaying on Blue Mountains accommodation and flight packages can enjoy a self-guided walk through or book onto a guided tour to gain extra insight into the caves’ history. More adventurous travellers could even put on a hard hat and tour off-the-beaten-path tunnels.

When is the best time to visit the Blue Mountains?

Autumn and spring are also nice times to travel on Blue Mountains accommodation and flight packages. Daytime temperatures usually hit between 15° and 20°C, so you can hike comfortably without the heat and crowds of summer. The autumn months are also accompanied by vibrant foliage, and you can see colourful flowers blooming at the Blue Mountains Botanic Gardens by booking Blue Mountains packages for a spring trip.

Winter gets cool and wet, but it’s the ideal time to book hotel and accommodation in the Blue Mountains for a cheap hotel deal. This is low season, so you may not have many other tourists to compete with for space on the trails and at hotels. Temperatures hit about 12°C during the day and 1°C at night, and there’s some rain with the occasional dusting of snow. This can lead to icy roads, so consider hiring a 4WD if you book Blue Mountains holiday packages for a winter visit. Bring along a pair of waterproof shoes as well because the trails can get muddy.

What is the best way to get around the Blue Mountains?

Some of the most famous attractions in the Blue Mountains are spread out from each other, and the best way to reach them is by car. Hire a car through Webjet after booking Blue Mountains accommodation and flight packages, and pick it up from Sydney Airport, which is the closest airport to the Blue Mountains. Hiring a 4WD is ideal, since some sites are located down unsealed roads, and it will especially come in handy if you’re browsing winter Blue Mountains packages.

There are a couple transport options to get from one destination to the next within the Blue Mountains. Blue Mountains Transit operates 25 bus routes as well as a daily coach that travels from Katoomba to Jenolan Caves in the morning, then back in the afternoon. You could also look into catching the Explorer Bus after booking Blue Mountains holiday packages. It operates in a hop-on hop-off style, making stops at many attractions around Katoomba and Leura, such as the Three Sisters, Scenic World, and Katoomba Falls.