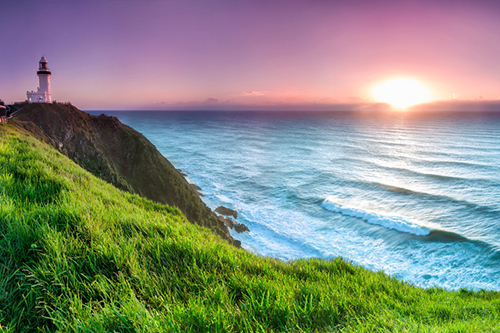 What are the best things to do in Byron Bay?

Cumbebin Wetland Sanctuary feels like a hidden gem but is only a 10-minute walk from Byron’s town centre. In 1999, the sanctuary was transformed from an uninteresting swamp to a thriving sanctuary for birds, small animals, and local plants. Boardwalks wind their way through the Cumbebin Wetland Sanctuary, allowing for views of wildlife and several lagoons. The sanctuary is the perfect place to go while visiting the area on Byron Bay packages if you’re looking for a calm and quiet spot near the CBD.

Wategos is one of several beautiful beaches to visit when you book Byron Bay accommodation and flight packages. It’s sheltered and has calm waves, making it a great spot for swimming and beginner surfers. Once you’ve spent some time enjoying the beach, get your body moving by hiking the 3.7-kilometre Cape Byron Walking Track that begins at the eastern edge of Wategos Beach. This track passes the easternmost point on mainland Australia as well as Cape Byron Lighthouse – one of the most iconic spots to see while holidaying on Byron Bay packages.

Make a quick trip southeast of the town centre to take in the untouched beauty of Arakwal National Park after booking Byron Bay holiday packages. It’s bordered by three kilometres of pristine beaches on the eastern side, including the popular Tallow Beach. Away from the water, there are forest walking trails where you can birdwatch and learn about the Arakwal people, who are the traditional owners and co-managers of the park. Spend time at Arakwal National Park when you book Byron Bay holiday packages to experience some of the best aspects of the region – beaches, beautiful plants and wildlife, and fascinating culture.

What’s on in Byron Bay?

Splendour in the Grass

Splendour in the Grass is one of the most popular music festivals on the calendar to attend after you book Byron Bay packages. Each year, the festival takes over the North Byron Parklands for three days of entertainment, and the music stages welcome artists across all different genres. Several major international artists get involved with the festival each year, including big names like Flume, Lorde, and the Cure. Festival-goers are also entertained by dance workshops, Aboriginal cultural performances, and art installations. Splendour in the Grass is usually held in late July, but book your Byron Bay holiday packages for travel in late October if you’d like to attend the 2020 event.

If you’re fascinated by the music, dance, and culture of Latin America, plan your Byron Bay accommodation and flight packages around Byron Latin Fiesta. Over the course of four days, the festival programme includes dance performances, live bands, DJs and dance parties, food stalls, and Latin dance classes where you could learn salsa, kizomba, and bachata. Whether you’re seasoned in the art of Latin dancing or you’re interested in learning more about the culture, Byron Latin Fiesta is open to everyone. To attend the event, book a hotel and accommodation in Byron Bay for the beginning of November.

Boomerang Festival is held in partnership with the annual Byron Bay Bluesfest, so booking Byron Bay packages at this time means you can get involved with two festivals while you’re away. The Boomerang Festival was developed as a way to share the traditions and cultures of Indigenous Australians with the wider community. Watch dance performances, see artists painting in traditional techniques, and take part in musical workshops. The three-day event contrasts traditional music and instruments to the modern sounds heard on the main stage of Bluesfest. To attend Boomerang Festival and Bluesfest, plan your Byron Bay holiday packages for mid- to late-April.

What is the best way to get around Byron Bay?

Byron Bay has a compact town centre that’s easy to get around on foot. Visitors staying in a hotel and accommodation in Byron Bay can walk just about anywhere in town in less than 30 minutes. If you’d prefer public transport, there are buses you could catch while visiting the town with Byron Bay packages. In total, there are nine bus routes, but seven only operate Monday through Friday. Two bus routes run on Saturdays, and one on Sundays.

A rental car is the way to go if you’d like to explore beyond the town centre while visiting the region on Byron Bay holiday packages. After booking your Byron Bay accommodation and flight packages, take a look at the rental cars available to hire through Webjet. Reserve a car than you can pick up from Ballina Byron Gateway Airport before making your way to your hotel and accommodation in Byron Bay.