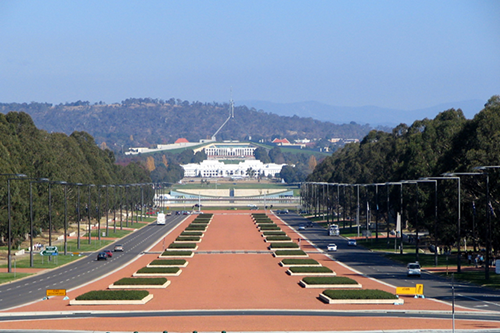 What are Canberra's most famous landmarks and monuments?

One of the most notable landmarks in Canberra is the Australian War Memorial. The massive monument commemorates all Australian lives lost in conflicts since 1885. Visitors who buy Canberra holiday packages can explore the on-site museum, art gallery, archives and library. Families buying Canberra holiday packages should make a point of visiting the Discovery Zone. It's child-friendly, and there are interactive displays to keep the little ones entertained.

If you're curious about Australian politics, the Museum of Australian Democracy makes for a fascinating excursion. In the museum, visitors can learn about past Prime Ministers, visit the Press Room, view historical political documents, and even sit in the former Prime Minister's Office. A trip to the Museum of Australian Democracy is one of the best free things to do in the city for holiday-makers heading to ACT with Canberra holiday packages.

Located between the National Library and Lake Burley Griffin, Questacon is one of Canberra's top attractions - especially since it promises fun and entertainment for visitors of all ages! Its proximity to other sights around the city also makes it easy to fit into your Canberra holiday packages itinerary. Inside the museum, there are several interactive science exhibits that children and adults alike will love. Visitors can also attend science shows, guest lectures and a variety of other special events. Some of the highlights for visitors with Canberra holiday packages include the Earthquake House and the H20-Soak up the Science room.

The National Portrait Gallery of Australia houses depictions of some of the country's most influential figures. The museum makes use of mixed media, and portraits are captured through painting, photography and sculpture. Visitors who’ve bought Canberra holiday packages that want to learn more about a portrait’s subject can attend various presentations that delve deeper into each public figure’s life. Plus, with the National Gallery close by, you can easily add tick off both attractions from your Canberra holiday packages on the same day.

What is the best way to get around Canberra?

If you want to get the most out of your Canberra holiday packages and not be limited to public transport timetables, hiring a car is the best way to go. With relatively low levels of traffic congestion and ample parking around the city, having a hire car at your disposable can make your time in Canberra a little easier. Plus, you'll have your own set of wheels to explore beyond the city limits.

Did you know that Canberra is the cycling capital of Australia? The city has an excellent network of paths, with some weaving straight past a smattering of the city’s must-see sights and landmarks. There are plenty of hire options available for tourists with Canberra holiday packages. Use a service like Cycle Canberra to have a bike delivered to your hotel, or look into Share A Bike. The latter has rental kiosks across the city and all you need to do to secure your two-wheeler is to swipe your credit card and select your bike.

If you're buying Canberra holiday packages to learn more about Australia's history and culture, hop aboard the Culture Loop bus. It is one of the best - and insightful ways to get around. This free service travels past sights including the National Museum of Australia, National Library of Australia, Museum of Australian Democracy and Parliament House.

What's on in Canberra?

Looking for a reason to book those Canberra holiday packages? Plan your trip to Australia's capital city around attending Floriade. This is the country's largest spring celebration and takes place in Commonwealth Park from mid-September to mid-October. Attendees can expect to see more than one million blossoming flowers on display, and entry is free.

The Canberra Balloon Spectacular is one of the city's top annual events. The spectacle happens across nine days in March, and sees more than 30 hot air balloons take to the skies. The best place for visitors buying Canberra holiday packages to watch the event is at Old Parliament House. Be sure to arrive early to secure the best spot! Pilots begin inflating their balloons from 6am and ascend in time for sunrise.

No matter if you're an architect, an interior designer, or just someone with a nose for style; the Design Canberra is a wonderful event to plan your Canberra holiday packages around. Attendees in ACT with Canberra holiday packages have the opportunity to explore more than 100 exhibitions, and can also hit up talks, activations and artist studios held by some local thought leaders in the design space.