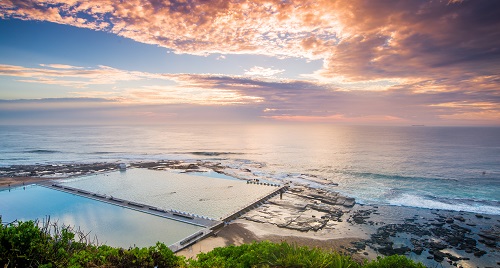 What are the best things to do in Newcastle?

Spend a couple of hours at Fort Scratchley to take in some history while travelling on Newcastle holiday packages. It was once used for military defence during the 19th and 20th centuries and most notably played a role in World War II. Fort Scratchley is now a museum that you can explore after booking Newcastle accommodation and flight packages. There are many historic buildings and installations to see around the Fort, including the Old Guardhouse, Barracks, and Battery Observation Post. Fort Scratchley’s hilltop location also means you can enjoy a 360-degree view of the city and ocean while visiting with Newcastle packages.

Hop in a rental car and head about 45 minutes west, and you’ll find yourself in the heart of one of Australia’s most famous wine regions. The Hunter Valley is home to about 150 vineyards and makes for an excellent day trip for visitors staying in a hotel and accommodation in Newcastle. Enjoy tasting a variety of wines including semillon and shiraz; the latter of which the Hunter Valley is particularly known. As well as the vineyards, the Hunter Valley is teeming with world-class restaurants and beautiful walking and cycling trails. Visitors holidaying on Newcastle holiday packages can take a self-guided tour of the Hunter Valley or book onto one of the guided tours the departs from Newcastle.

There are a handful of sea baths to have on your radar after booking Newcastle packages, and Bogey Hole is one of the most popular. Although it was man-made, Bogey Hole has an untouched natural feel to it, and it also holds the title as the oldest ocean bath on Australia’s east coast. Head to Bogey Hole to go for a swim while also taking in the beautiful views of the bordering cliffs and Pacific Ocean. Bogey Hole is open year-round, but you’ll enjoy it at its best by travelling on Newcastle holiday packages during the warm summer months.

What is the best way to get around Newcastle?

Public transport is available across Newcastle, but hiring a car is the best option to venture outside the city while holidaying on Newcastle packages. Reserve a rental car through Webjet after booking your Newcastle accommodation and flight packages. Then you can conveniently pick up your car at the airport before heading to your hotel and accommodation in Newcastle.

There are 21 bus routes available around Newcastle and its suburbs. Two of these buses – routes 130 and 131 – are also available to catch from the airport into the CBD. A short light rail system is another option available to visitors travelling on Newcastle holiday packages. It makes six stops between the Newcastle Interchange and Newcastle Beach. Are you hoping to venture into the western suburbs or nearby towns after booking Newcastle packages? Hop on the train at Newcastle Interchange to catch a ride to places along the Central Coast & Newcastle Line or the Hunter Line. Opal transport cards are accepted on each form of public transport around Newcastle.

What’s on in Newcastle?

Book a hotel and accommodation in Newcastle in August to attend one of the region’s most popular events. The Newcastle Music Festival showcases jazz and classical musicians, many of whom call the Newcastle region home. Concerts pop up in art galleries, the Christ Church Cathedral, and other beautiful venues around the CBD throughout the month. Visitors holidaying on Newcastle packages can also get involved with a series of musical masterclasses held as part of the festival.

The Big Picture Fest is an international street art festival that hits the streets of Newcastle for three days each spring. Walk around the CBD to see both local and international street artists at work designing colourful murals. Other elements of the festival include free street parties, walking tours, workshops, and talks with some of the artists. Book Newcastle holiday packages for travel in early October to attend the Big Picture Fest.

The Hunter Valley is one of the country’s most loved wine regions, and it’s only about 45 minutes from Newcastle by car. One of the best times to visit is during the two month long Hunter Valley Wine & Food Festival. The festival schedule is teeming with excitement between its vineyard tours, wine tasting, winemaking masterclasses, cooking classes, and special menus at gourmet restaurants. Each of these events is accompanied by the stunning backdrops of the Hunter Valley vineyards. Book Newcastle accommodation and flight packages for travel in May or June to enjoy the flavours of the festival.