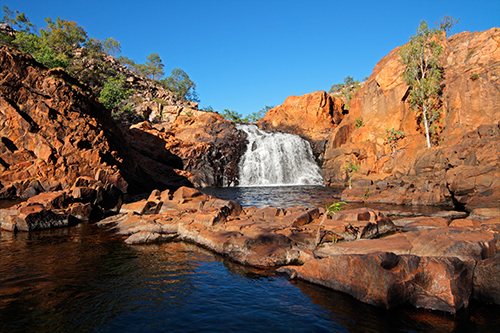 What are the best places to stay in the Northern Territory?

The capital and largest city of NT is one of the most popular spots to visit with Northern Territory holiday packages. Darwin is Australia’s northernmost city and the country’s only capital city located within the tropics. It has a unique culture, making it the perfect place to begin your tropical Top End adventure while holidaying on Northern Territory packages. The city has some World War II landmarks, beautiful beaches, and a dynamic food scene. Outside of the city, visitors can take side trips to the Tiwi Islands, Litchfield National Park, and the northern section of Kakadu National Park.

Base yourself in the heart of the Outback by booking Northern Territory accommodation and flight packages to Alice Springs. The NT’s second-largest city is teeming with art galleries, Aboriginal culture, and desert parks. Here, visitors can learn about things that played a significant role in Australia’s history, including the Royal Flying Doctor Service and the telegraph station that connected Darwin and Adelaide. You can also spend a day exploring the West MacDonnell Ranges, which are right on the doorstep of Alice Springs. If you have time, extend your Northern Territory holiday packages for a few days to see the unmatched beauty of Uluru.

Katherine is located at the point where the tropics meet the Outback. Visit this beautiful town to get the best of both worlds while holidaying on Northern Territory packages. Katherine Gorge in Nitmiluk National Park is the centrepiece of the area and has gorgeous waterfalls, scenic lookouts, and Aboriginal rock art. Other landmarks nearby include Mataranka Thermal Pool, Bitter Springs, and the Cutta Cutta Caves. Katherine doesn’t have its own airport, so the best way to reach the town is from Darwin. Book Northern Territory holiday packages with flights into Darwin Airport, then rent a car through Webjet to make the drive south to Katherine.

What’s on in the Northern Territory?

Look into a hotel and accommodation in the Northern Territory in August to attend the annual Darwin Festival. The late-winter festival celebrates the local culture of Darwin and the surrounding areas. Events take place across the city for 18 days and cover all different areas of the arts – live music, theatre, visual art, and cabaret. The events celebrate different international cultures as well as Indigenous heritage.

Taste of Kakadu is the ideal festival for foodies travelling with Northern Territory holiday packages. This food festival sees visitors have the chance to try native ingredients and foods that have featured in the diets of local Aboriginal groups for more than 60,000 years. Over the course of 10 days, local experts lead foraging walks, scenic cruises and cooking classes through Kakadu National Park. Taste foods new to your palate, learn interesting cooking techniques, and immerse yourself in the culture of Kakadu through delicious communal feasts. Take in the incredible tastes of the Kakadu region by booking Northern Territory packages for this event in late May.

When is the best time to visit the Northern Territory?

The NT has two primary regions: the Top End and Red Centre. The Top End has tropical conditions, while the Red Centre experiences an arid climate. If you’re wanting to head to the Top End with Northern Territory holiday packages, look to travel between April and November. These months are outside of the region’s wet season and see much less rain and humidity than the summer months. Drier weather also means more seasonal routes and attractions are open in national parks, allowing you to experience as much as possible while visiting the region with Northern Territory packages. During the day, temperatures generally climb higher than 30°C, however nights do cool down to about 20°C.