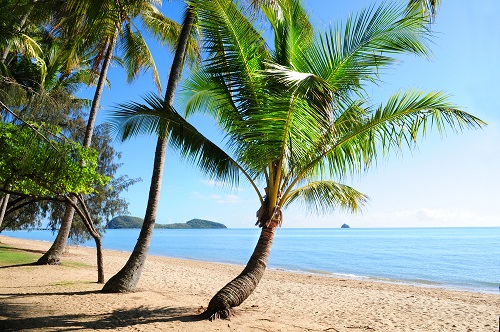 What can you do in Palm Cove over the weekend?

Tropical North Queensland is teeming with spectacular national parks and rainforests to discover while travelling on Palm Cove holiday packages. Kuranda National Park is a stone’s throw away from Palm Cove, and it features dramatic landscapes, native wildlife and a rich Aboriginal culture. There are several attractions available to visitors travelling on Palm Cove packages. Walk along scenic trails, see Aboriginal cultural performances, visit the butterfly sanctuary and koala gardens, and ride through the rainforest on the Skyrail cableway and Kuranda Scenic Railway.

Double Island is located 1.5 kilometres (0.9 miles) offshore from Palm Cove and is bordered by colourful reefs. You can head to the island by kayak while visiting North Queensland on Palm Cove accommodation and flight packages. Experienced kayakers can head out on their own, but there are also guided kayaking tours of Double Island available from the mainland. Keep an eye out for tropical fish, fringing coral reefs, and the occasional sea turtle around the island.

Spending time at Palm Cove Beach is a must-do for many visitors who book hotel and accommodation in Palm Cove. The sprawling beach rarely sees large crowds, and it feels like a tropical oasis bordered by bright blue water and ancient melaleuca trees. Palm Cove Beach is a popular spot for relaxing, and its stinger nets mean you can head into the water no matter what time of year you travel on Palm Cove packages. Head to the northern end of the beach as well to see a series of rock formations and walk along a 200-metre -long hiking track that leads to a smaller secluded beach.

When is the best time to visit Palm Cove?

Tropical North Queensland has two main seasons to keep in mind when planning Palm Cove accommodation and flight packages. The wet season lasts from November to March while the dry season takes place between April and October.

You can look forward to lower levels of rain and humidity and cooler temperatures by booking Palm Cove holiday packages for dry season travel. Daytime temperatures average 26°C, and evenings cool down to about 17°C. The dry season is the best time for hitting the beach and enjoying water activities in Palm Cove. All of the dry season is fairly busy, but the official high season takes place in the winter months between June and August. Hotels and accommodation in Palm Cove tend to increase their rates, so book your holiday package early for the best deal.

Tropical North Queensland has a stinger season, and you’ll experience it by booking Palm Cove packages between November and May. This doesn’t need to impact your plans – just be sure to wear a stinger suit when snorkelling or swimming in areas without stinger nets.

What are the best restaurants and cafes in Palm Cove?

This beachfront cafe is an excellent spot to go for a light meal or refreshing drink while visiting North Queensland on Palm Cove holiday packages. Grab a pastry, baguette sandwich, acai bowl, or nourish bowl to enjoy on the terrace or on the beach just across the street. The cafe also has an extensive menu of espresso drinks, smoothies, milkshakes, and fresh juices that make the perfect accompaniment for a day on Palm Cove Beach.

Beach Almond is a must-visit spot for seafood lovers travelling on Palm Cove holiday packages. The restaurant showcases the best in Queensland seafood and uses Southeast Asian spices and sauces for a unique menu. Specialties to try include char-grilled barramundi with laksa, Balinese-style prawns, and soft shell crab with a Thai lemongrass sauce. Seafood is the star at Beach Almond, but there are also pork, chicken, beef, and veggie dishes available.

The Chill Cafe is one of the most popular spots to go while holidaying on Palm Cove accommodation and flight packages. You can head there for breakfast in the morning, cocktails in the evening, and a menu that showcases modern Australian cuisine. Enjoy classics like French toast, eggs benedict, fish tacos, and a range of pizzas and pastas. The Chill Cafe terrace also features a gorgeous view of the tropical Queensland coastline to take in while holidaying on Palm Cove packages.