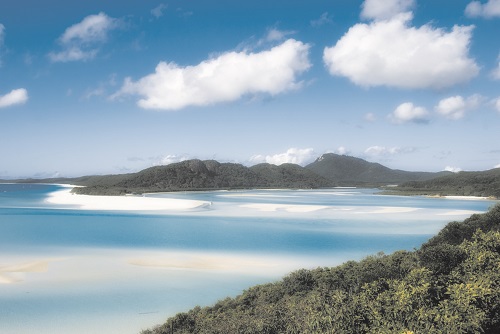 When is the best time to visit Queensland?

Queensland is an excellent year-round destination. Travel to Cairns, Port Douglas and Palm Cove for hot, humid weather that averages 31°C during the day in the summer. If you're looking to escape the crowds, book your Queensland holiday packages for travel between November and April. It's the rainy season for Cairns, and the lower tourist numbers mean you'll possibly find cheaper Queensland holiday packages flights and accommodation. If you're hoping to visit the Whitsundays with your North Queensland holiday packages, you need to be aware of stinger season. From October to March, travellers may want to wear stinger suits for swimming, snorkelling, and diving adventures. Noosa is another popular place to visit with Queensland holiday deals. It doesn't receive as much rain, and the stingers don't travel so far south. If it does rain during your trip, the storms are generally brief. Grab a cocktail, and by the time you've finished your drink, the clear skies and sunshine will likely be back.

What are the best things to do in Queensland?

The Great Barrier Reef is the jewel of Queensland. It's one of the biggest reasons people book Queensland holiday deals. The best way to experience Australia's natural wonder is with a tour. You can sign up for glass-bottom boat trips, snorkelling expeditions, or go on a diving adventure. With more than 1,600 species of fish to see as well as reef sharks, dugongs, dolphins, and turtles - it's a once-in-a-lifetime experience!

If you want to see the Great Barrier Reef, make sure your Queensland holiday deals includes a stop in Cairns. It's one of Australia's top tourist destinations and is a superb base to explore the best Queensland has to offer. You can hire a car and drive up to the Kuranda Scenic Railway, explore the UNESCO World Heritage Site-listed rainforests of Barron Gorge National Par, or go island hopping to Fitzroy Island.

For a tropical island holiday of your dreams, travel to the Whitsunday Islands. It's a popular destination in many Queensland holiday packages for a good reason. Out of the 74 islands that form the group, only five haven't been declared national parks. The result is a pristine paradise that's a haven for scuba divers and sun worshippers.

An hours’ drive away from Cairns is Port Douglas. It's a popular destination of choice for visitors buying Queensland holiday deals who want a laid back tropical vibe. When you aren't exploring the Great Barrier Reef, you can relax on Four Mile Beach, grab a coffee at one of the cute cafes, and visit the art galleries. If you're looking for something more adventurous for your Queensland holiday packages, you can go on day trips to Daintree National Park, Cape Tribulation or the Cape York Peninsula.

Most Queensland holiday packages usually include a stop at the Gold Coast. It’s one of Australia's premier holiday regions. During the day, you can catch some waves, visit theme parks, or head to the beach. At night, there are plenty of bars, restaurants, and parties to keep you entertained. For families buying Queensland package deals, the Gold Coast isn't only for young travellers; there are family-friendly attractions such as Movie World and Currumbin Wildlife Sanctuary.

What's on in Queensland?

Noosa is an area located on the Sunshine Coast. Each year in May, it hosts a foodie event that attracts hungry travellers from near and far. Queensland holiday packages including flights are the best way to enjoy the event, as you’ll save on accommodation and airfare and that extra spending money can be put towards partaking in any of the festival’s ticketed events.

If you want to use your Queensland holiday packages to celebrate Australia's unique cultural heritage, attend the Yarrabah Band Festival. It takes place in October and is one of the region's premier events celebrating Australian Indigenous culture. There's live music, food stalls and local artists selling their wares.

Another foodie event that deserves a spot on your Queensland itinerary is The Curated Plate. Held in August, some of the biggest Australian and international chefs attend the festival. It takes place over four days in a series of pop-up events. Book Queensland package deals over the event’s dates and taste dishes prepared by the creme-de-la-creme of Queensland's food scene.