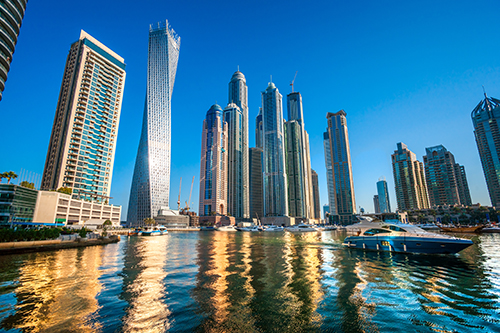 What’s on in Dubai?

Taste some of the UAE’s best and most innovative food by booking Dubai accommodation and flight packages that coincide with the dates of the annual Dubai Food Festival. Over the course of 18 days, events and dining destinations pop up across the city. The festival showcases both local and international cuisines that range from casual street food to elegant fine dining. There are dozens of foodie events to attend while holidaying on Dubai packages, including special menus at popular Dubai restaurants, cooking demonstrations from international celebrity chefs, and several kids’ activities. To attend the Dubai Food Festival, look into hotel and accommodation in Dubai from late February to mid-March.

Learn a bit more about the local culture by travelling on Dubai holiday packages for UAE National Day. On the 2nd of December every year, locals celebrate the unification of the seven emirates that make up the UAE. There are a variety of exciting festivities to witness while holidaying on Dubai packages for UAE National Day. A fireworks display is the main event, along with cultural performances, car rallies, and decorations on buildings and palm trees. You could celebrate UAE National Day anywhere in the United Arab Emirates, but no celebrations are as spirited as the ones in Dubai!

If you’re a music lover, there’s no better time to book Dubai accommodation and flight packages for a trip to the Dubai Jazz Festival. Contrary to its name, the annual festival includes performances across a variety of musical genres, including jazz, blues, and rock. The festival spans three nights with shows from major international recording artists. In previous years, festival-goers have been able to experience performances from stars like Lionel Richie, Mariah Carey, and John Legend. Plan to book Dubai packages for travel at the end of February to attend the event.

What are the best things to do in Dubai?

With more than 1,400 mosques across the emirate of Dubai, there’s no shortage to visit while holidaying on Dubai packages. If you only see one while visiting the city though, make it the Jumeirah Mosque. The impressive mosque is located beside the waterfront and was designed using a medieval technique that calls on white stone. Guided tours are available in which visitors to Jumeirah Mosque can admire the architecture while learning more about Islam and its traditions.

Dubai’s Burj Khalifa is famously the tallest building in the world at 828 metres. The skyscraper dominates the city skyline, making it impossible to miss while visiting on Dubai holiday packages. Head to Burj Khalifa SKY on the 148th floor for a dizzying yet thrilling view from the world’s tallest manmade structure. If you’d like to accompany the view with a meal or drink and live music, you could even head a few floors higher to The Lounge. The views from Burj Khalifa are always impressive, but particularly during sunrise and sunset when you can admire a soft glow over the city, Persian Gulf, and desert.

Dubai may be a modern destination, but there are still plenty of spots to witness the “Old Dubai.” Plan a visit to the Bastakiya Quarter in the northern end of the city when you book Dubai holiday packages. The neighbourhood dates back to an age of sheiks and merchants selling pearls and colourful textiles. You won’t find any skyscrapers here; instead, Bastakiya Quarter is a maze of sand-coloured houses, winding laneways, and traditional Arabian restaurants and tea houses. If you’re fascinated to explore the city’s traditional roots, consider booking your hotel and accommodation in Dubai’s Bastakiya Quarter.

What is the best way to get around Dubai?

While there’s some public transport to catch while visiting the UAE on Dubai holiday packages, the majority of locals still opt to get around by car. The city is currently undergoing works to expand its public transport network to accommodate tourists who visit the city. There are currently two metro lines in Dubai, which travel to 49 stations around the city. Catch the metro to major areas such as the Marina, the Burj Khalifa, and Dubai Airport while visiting on Dubai holiday packages. Visitors who book hotel and accommodation in Dubai can also use trams and buses. 1,500 air conditioned buses circulate around Dubai, and a tram runs for 14.5 kilometres (9 miles) between Dubai Marina and Palm Jumeirah. It makes stops all along Al Sufouh Road beside the waterfront.

If you’d prefer to see the city like a local, consider getting around by car when you book Dubai accommodation and flight packages. Taxis are widely available to catch while holidaying on Dubai packages, as are ride sharing apps Uber and Careem.