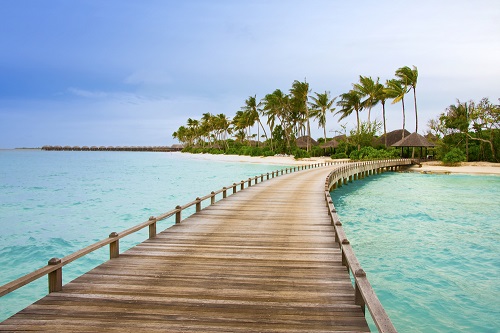 What are the best things to do in Male?

There’s no shortage of snorkelling and diving spots to discover after booking Male accommodation and flight packages. The most famous spot (and one of the most scenic) is Banana Reef, which is located in the North Male Atoll. This was the first major reef discovered in the Maldives, and it played a large role in putting the Maldives on the map among the diving community. The crescent-shaped reef is home to vibrant coral and a diverse fish population, and it’s surrounded by a set of cliffs and caves. There are a handful of Banana Reef snorkelling and diving tour operators that you can look into while holidaying on Male packages. Some even run nighttime dives.

Also known as Male Friday Mosque, Hukuru Miskiy will give you an insight into local Islamic roots while visiting the Maldives on Male holiday packages. The mosque was built in the mid-17th century and is the oldest building in Male. Hukuru Miskiy is different to other mosques you’ll see around the world as it was constructed from coral blocks from around the Maldives. It also features intricate coral carvings and columns outside and wood carvings inside the mosque. Non-Muslims holidaying on Male packages are able to visit Hukuru Miskiy – just be sure to come outside of prayer time and wear conservative clothing.

The National Museum is the perfect place for visitors on Male holiday packages to learn about different periods in Maldivian history. Artefacts span the country’s many eras, starting from ancient and medieval times to the Islamic period and into the modern day. Explore various exhibits to see ancient weapons, royal thrones and ceremonial robes, and religious idols from both Buddhism and Islam. Since the ocean plays such a large role in Maldivian life, you’ll also see artefacts from the marine world, such as skeletons and replicas of Maldivian fish as well as carvings made from coral.

When is the best time to visit Male?

Temperatures in Male stay fairly consistent year round. Come prepared for average temperatures of about 30° to 32°C during the day and 26° to 27°C at night when you book Male holiday packages. There’s a wet season and a dry season to plan around when reserving Male accommodation and flight packages.

Dry season in Male lasts from November to April. There’s very little rain at this time of year to accompany the warm temperatures. Dry season is the ideal time to book Male holiday packages if you’re hoping to spend a lot of time outdoors and on the beaches. However, this is high season and hotels and accommodation in Male tend to increase their rates. Book your Male packages early for the best price on both hotel and flights.

The wet season between May and October comes with rain and strong winds. Rain is often heavy, but luckily it tends to pass quickly. The wet season gets the biggest waves, so this is an excellent time for surfers to travel on Male accommodation and flight packages. Smaller crowds across the Maldives compared to the dry season also means you’ll find the best rates on hotels and accommodation in Male at this time.

What is the cost of visiting Male?

There are various types of hotels and accommodation in Male that range from budget-friendly to luxury. Staying in an iconic overwater bungalow is tempting to some travellers who book Male holiday packages, but these luxe stays also come with high price tags. Overwater bungalows typically cost around $1,000 AUD per night. Hotels on land are often a more affordable alternative for travellers holidaying on Male packages. Budget rooms are available for around $200 AUD per night.

There are more than 200 inhabited islands in the Maldives, and the best way to get from one place to the next is by ferry. An Airport Ferry travels between Velana International Airport and Male City with tickets costing 22 MVR ($2 AUD). Ferries between islands vary in price depending on how far you’re going. Plan to spend between 30 and 60 MVR ($2.70 and $5.35 AUD) for each ferry ride you take while holidaying on Male packages.

Doing some snorkelling or diving is essential for many travellers who book Male holiday packages. You can rent snorkelling gear for about 125 MVR ($11.15 AUD) to take in the coral located just offshore. Several tour operators offer snorkelling and diving excursions around the Maldives, which often cost around 1,500 MVR ($134.10 AUD). The National Museum in Male is another great spot for visitors looking to learn more about the history and culture of the Maldives. Entry costs 100 MVR ($8.95 AUD).