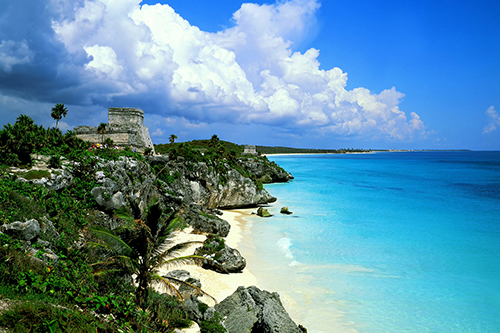 What are Mexico’s most famous landmarks and monuments?

The history of Chichen Itza spans almost 1,000 years. It was built as one of the major cities of the Mayan Empire. Today, it’s one of the most important examples of Mayan architecture on the Yucatan Peninsula. Visitors can stroll through the sacred site to learn about Mayan history and culture while visiting on Mexico holiday packages. Important landmarks to see in Chichen Itza include the Warriors’ Temple, El Caracol, and El Castillo. To base yourself close to Chichen Itza, book Mexico accommodation and flight packages that arrive into Cancun International Airport.

Castillo Chapultepec sits on a hill overlooking Mexico City. Construction on the castle began in 1785 when Mexico was under colonial Spanish rule. It was designed as a summer residence for then-ruler Bernardo de Galvez and features opulent designs that were popular in Spain at the time. Once Mexico became independent, Castillo Chapultepec remained a presidential residence for about 75 years. Today, it’s a museum that people travelling on Mexico holiday packages can visit. Admire the elaborately designed rooms and the uninterrupted view some vantage points have over Mexico City. Spend some time exploring Castillo Chapultepec by booking Mexico packages with flights into Mexico City International Airport.

Of all the places to enjoy the beaches and coastal areas of Mexico, Cabo is one of the best. Located on the Baja Peninsula, Cabo Pulmo National Park is an unforgettable place to visit when you book Mexico packages. The coastal marine park is home to the oldest – and one of the most pristine – coral reefs on North America’s west coast. It’s the ideal place to go for snorkelling and diving when you book a hotel and accommodation in Mexico’s Baja California region. See the colourful coral and tropical fish up close by booking onto a snorkelling or diving tour through the marine park. To experience the beauty of Cabo Pulmo National Park, book Mexico holiday packages with flights arriving into Los Cabos International Airport.

What are the dos and don’ts of visiting Mexico?

Do tip people in the service industry

Like much of North America, people who work in Mexico’s service industry rely on tips for their income. 15% of your total bill is an appropriate amount to tip restaurant servers, bartenders, and taxi drivers while holidaying on Mexico packages. It’s also a nice gesture to leave a tip for cleaning staff working at your hotel and accommodation in Mexico. About 50 pesos ($3.55 AUD) per day is a good base amount.

Mexico has its own version of ‘Bali Belly’, called “Montezuma’s Revenge.” Montezuma’s Revenge can be caused by contaminated tap water, as well as by food that hasn’t been prepared properly. Keep to drinking bottled and filtered water only while travelling around on Mexico accommodation and flight packages. For food, go for options that are prepared fresh to-order or that is prepared in front of you.

Do learn some phrases in Spanish

If you book Mexico holiday packages for travel to places like Cancun or Mexico City, you will encounter locals that do speak some English. However, if you choose to venture off-the-beaten-path with your Mexico packages, it’s helpful to have some Spanish phrases in your repertoire. Study basic words and phrases that you can put to use while ordering at a restaurant, purchasing tickets to tourist attractions, or asking for directions.

What should I pack for Mexico?

Mexican power points accept plug types A and B, just like the majority of North America. Make sure you have an adapter to fit this plug type before embarking on Mexico holiday packages. Credit and debit cards are widely accepted across Mexico, particularly in popular resort areas, but you’ll likely come across small vendors who are cash-only. It’s a good idea to carry some Mexican pesos while visiting Latin America on Mexico accommodation and flight packages. Before leaving on holiday, change some dollars into pesos to get you started. Other must-pack items for anyone booking a hotel and accommodation in Mexico are sunscreen and bug spray. Mosquitos are prevalent across Mexico, particularly in the southern regions and especially between June and October. Bug spray will prevent mosquitoes from turning you into their latest snack.

In terms of clothing, bring along some warm-weather clothing, such as shorts, t-shirts, lightweight dresses, and skirts. You’ll also want to bring a jumper, jeans, and jacket for the evenings in cooler inland destinations, and swimsuits if you’ll be hitting the beach along the Mexican coast. No matter where you go with Mexico packages, hiking is a popular activity. Pack some clothes to wear during a hike as well as a pair of comfortable hiking shoes.