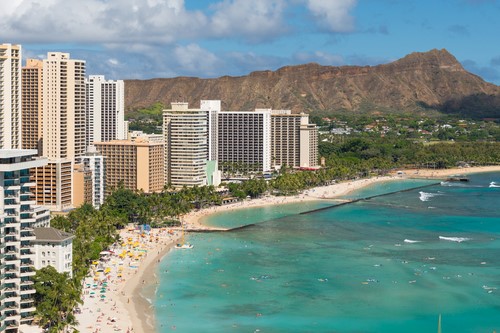 When is the best time to visit Honolulu?

The best time to visit Honolulu is over the city's two shoulder seasons. From April to June and September to December, the top attractions have smaller crowds, and there are good deals to be found on Honolulu holiday packages.

Temperatures start to cool off in Honolulu between September to mid-December. There's a lull in tourism over these months and you can laze around Waikiki Beach without crowd numbers common at other times of the year. If you're a surfer searching for Honolulu holiday deals, plan your trip around the Vans Triple Crown of Surfing event.

One of the busiest periods for tourism in Honolulu is from late December to the beginning of April. Travellers from all over the world fly to Hawaii to soak up the good weather and the celebrations around the new year. There is also an array of winter events that visitors buying Honolulu holiday packages can attend. Some of the most popular options include the Volcom Pipe Pro, Honolulu Festival and the Hawaii Bowl.

Head to Hawaii the busy summer season begins and book your Honolulu holiday packages for travel in the spring months. Another great reason to buy Honolulu holiday deals between April and June is the annual humpback whale migration. Sign up for guided boat tours to have the chance to get up-close with these giant creatures.

Honolulu is a peak period for Honolulu holiday packages. From mid-June to August, the city fills up with both American and international tourists looking to take advantage of the beautiful weather, golden beaches and calendar of events. Flight prices can increase with the seasonal demand. If you want to snatch up good Honolulu holiday deals for summer, book a few months in advance.

What are Honolulu's most famous landmarks and monuments?

Named after the pearls that were harvested from its waters, Pearl Harbor is a National Historic Landmark. If you're heading to Hawaii on Honolulu holiday packages and have a keen interest in World War II, Pearl Harbor is undoubtedly a must-visit to put on your sightseeing itinerary. It is one of the most frequented sites by tourists in all of Hawaii. Plan to spend most of your day at the site, as there is much to see and experience. Travellers on the island thanks to Webjet’s Honolulu holiday deals can walk through the exhibits and museums, listen to audio guide tours, and pay respects to memorials for the USS Arizona, USS Oklahoma and at Battleship Row. One of the best ways to see Pearl Harbor is on an organised tour that departs from the city.

Hanauma Bay was formed within the crater of a volcano. Today, it's one of the best spots for travellers buying Honolulu holiday deals to go snorkelling and discover the world of marine life that Hawaii is so famous for. In an effort to protect and conserve the bay’s ecosystem, the number of visitors per day is restricted. So, keen snorkellers should plan ahead and book onto a tour at the same time as securing their Honolulu package deals.

The Honolulu Museum of Art houses 50,000 works, with its Asian Art exhibition making up nearly half of the collection. Within the exhibition, visitors who have purchased Honolulu holiday packages can take in the incredible displays that feature 23,000 examples of art from Japan, China and Korea. The museum also has a small collection of antiquities of ancient Greek, Roman and Egyptian artefacts - some of which are more than 5,000 years old!

What are the best restaurants and cafes in Honolulu?

Arvo is an Australian-style cafe that is one of the best places to grab a bite to eat in Honolulu. It is located in Kaka'ako, one of the city's trendiest areas. If you're missing the breakfasts of home while enjoying Honolulu holiday packages, then make a beeline for Arvo to get your fix of smashed avocado, chia pudding and even Vegemite on toast.

Leonard’s Bakery is an institution of the Honolulu food scene. Opened in 1952, the bakery has built a cracking reputation for its mouth-watering malasadas, a style of Portuguese doughnut. Make a trip to Leonard’s to pick up some of these fried treats, as well as traditional Portuguese breads plus freshly-baked cookies, pastries and pies. If you're travelling to Hawaii with Honolulu holiday packages and have a sweet tooth, a trip to Leonard's will hit the spot!

You can't travel to Hawaii on Honolulu holiday packages and not try a poke bowl! This dish of raw fish, rice and vegetables is one of Hawaii’s culinary calling cards! And a great spot to try a poke bowl for yourself is Ono Seafood. This unassuming-looking diner serves up made-to-order bowls that are touted as some of the best on the island - so don’t be fooled by the hole-in-the-wall storefront! Wander inside to place your order for your bowl, choosing any or all of the ingredients that take your fancy. Bowls are made and charged by weight.

Craving a caffeine hit while in Hawaii? Head to one of Honolulu Coffee’s locations; there are several throughout the city. Honolulu Coffee was established in 1992 and champions a farm-to-cup ethos that begins with growing beans on the Kona coffee farm. Pair your cup of Joe with a pick of freshly-baked pastries or a savoury bite. Coffee connoisseurs can even book onto a private roasting tour at the Honolulu Experience Center in Waikiki!