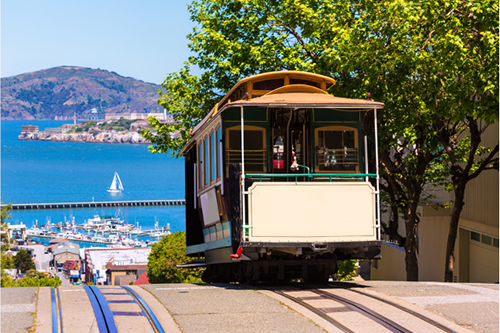 When you’re planning on visiting a city as exciting as San Francisco, chances are that you want to spend the most time on building your itinerary and researching the best markets, restaurants and to-dos. Perhaps you don’t want to waste time comparing flights and airlines, and tracking down the best San Francisco accommodation. Enter Webjet’s San Francisco holiday packages. These travel deals bundle cheap airfares to San Francisco with stays in some of the city’s best hotels and accommodation options. Families and groups can easily book airfares and stays for everyone in their travelling party in just one click. Plus booking these bundled holiday packages will actually save you money too! It’s a win-win.

Find and book the best San Francisco holiday packages with Webjet and spend less time on the nitty-gritty, and more time on planning the ultimate holiday in the Golden Gate City.

Flights to San Francisco depart from every major capital city in Australia, and there are even direct return flights available too. Airlines that offer airfares to San Francisco as part of holiday packages include United Airlines, Qantas, American Airlines, Air New Zealand and Virgin Australia. The average travel time of a non-stop flight is between 13 and 15 hours, and routes with one stopover can take travel time up to 18 hours or longer. San Francisco has three airports, however the major hub - and where most flights from Australia land - is San Francisco International Airport (SFO).

Where to Stay in San Francisco

As one of the most-visited cities in the USA, it is only natural that San Francisco has an excellent range of accommodation options for visitors to choose from, no matter if you’re travelling as a couple, as a family, on a budget or on a luxury holiday.

Hole up in one of the rooms or suites at this beautiful boutique hotel, which is located just a few minutes’ walk from Union Square and Chinatown. The hotel has two great eateries on-site - Cafe de la Presse and Herlen Place - as well as a lobby library, 24-hour fitness centre and a Grab & Go snack bar. The 140 accommodations are stylishly appointed and all come equipped with iPod docking stations, WiFi and flat-screen TVs. Room service is available.

For a room (or suite) with a bay view, make for the Fisherman’s Wharf area and a stay at the Argonaut Hotel. The boltholes at this 4-star boutique hotel are decked out with nautical and water motifs; a theme that extends throughout the hotel. Take your meals in the Blue Mermaid Restaurant, work up a sweat in the fitness centre, be first in line to pick up one of the free bike rentals, or join the guided historic tours that happen on weekends.

Be close to all of the city action with a stay at Stanford Court San Francisco. There are 393 rooms in this centrally located hotel, with room types covering Deluxe and Premier options up to stylish Suites. The hotel has a on-site restaurant, plus a bar and lounge, buffet breakfasts (for a fee) and a 24-hour fitness centre.

Things to do in San Francisco

San Francisco is home to many world-famous attractions, such as the Golden Gate Bridge and Park, and Alcatraz Island. If seeing these sights are on your travel bucket list, book a cheap holiday package to San Francisco and see for yourself why this city has such an enduring reputation.

Golden Gate Park is a magnet for first-time and return visitors to San Francisco. It is larger than Central Park in New York City and is home to a music concourse, museum, Japanese tea garden and conservatory of flowers, among others. Walk around the banks of one of the many lakes, visit the residents of Bison Paddock, or listen to a live music gig at the Beach Chalet.

Known primarily for its eponymous prison, Alcatraz Island is one of the top-ranked tourist attractions in San Francisco. Whether your interest in visiting stems from a love of history or a love of the 1970s film, seeing the notorious Alcatraz Island and its prison is a memorable experience. Peer into the cell that once housed Al Capone, take the award-winning cellhouse audio tour, and even book onto an eerie night tour of the prison and island.

The de Young Museum contains one of the biggest collections of 17th to 21st century art in the United States. It is also home to the Hamon Observation Tower, a space of floor-to-ceiling glass that offers an uninterrupted outlook across downtown San Francisco and the Golden Gate Park.

San Francisco’s peak season is during summer, from June to August, and this is means that hotel prices peak dramatically. Those wanting to visit the Golden Gate City during summer will should book their San Francisco holiday packages well in advance to find the best deals. In terms of crowds and prices, one of the best times to visit the city is in September to November. The days are still pleasantly warm, but the crowds have begun to thin out. For travellers, this creates opportunity to find and book top value cheap flights and accommodation.